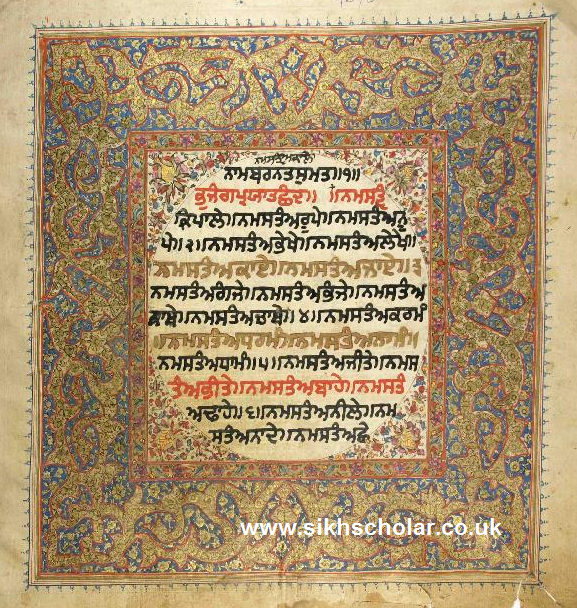 This month’s book was ‘Basking in the Divine Presence, a Study of Jaap Sahib’ by Jaswant Singh Neki. The book can be found here.

Jaswant Singh Neki worked in Amritsar as a qualified psychiatrist and subsequently became a professor of psychiatry. He has written many books on Sikhi, all of which are eloquently written with a profound level of english. His first book was published in the 1950s (this one was published in the 1980s). This book is about Jaap Sahib, which the author summarises as being revealed to Guru Gobind Singh Ji during meditation and is an echo of the cosmic drum. The baani was composed in Paonta Sahib. The book goes through the history and compilation of Jaap Sahib as well as the baani itself.

The members started the discussion by reflecting on the book overall. Despite being written in only 147 pages, the concepts explored by the author are deeply spiritual and the book is much more than a mere translation and commentary. Clearly the author was of a high spiritual level. The brief history of Guru Gobind Singh Ji was done very well; within a couple of pages, the key stages of Guru Gobind Singh Ji’s life were accurately reflected. The author goes on to say that Jaap Sahib is something to be experienced as opposed to being simply read, highlighting the need to completely immerse oneself in the Baani.

This is a book that could be generically given to any spiritual seeker. Anyone (Sikh or non-Sikh) could read as it and gain significant insights into Sikh spiritual thought. As well as spiritual concepts, the author links the baani with modern scientific thought. The book is probably more accessible by being relatable to all (rather than the author writing it from a purely psychiatric point of view).

The title of the book is ‘Basking in the Divine Presence’. Rather than Guru Gobind Singh Ji simply reciting the names and qualities of God, the Guru has described his experience of Waheguru and the subsequent respectful worship/obeisance to Waheguru. A comparison is directly made to the 99 names of Allah and exploration of why Jaap Sahib is more than 199 names/qualities of God. But rather than Jaap Sahib being a prayer, the reader is encouraged to use Jaap Sahib to enhance their own spiritual experience. “On the wings of his magical words the Guru wafts the soul of his reader to the very hem of the Divine.”

The author used the Mool Mantar as a starting point to explore some of the deeper concepts within Sikh spirituality, almost encompassing the ‘wholeness’ of Waheguru. The members reflected that the energy within Jaap Sahib is slightly different than some of the other baanis we read. It is sweet but powerful at the same time, and the book helped the members pause and reflect upon this. The members discussed different ways of experiencing Jaap Sahib, including a practice adopted by some American Sikhs whereby the Sangat sing Jaap Sahib in musical form and physically bow at each point where the word Namo is uttered. Waheguru is also described as warrior, something which is fairly unique to Guru Gobind Singh Ji’s writings.

The author took various different aspects of the metaphysical and philosophical concepts within Jaap Sahib and expanded on these. Firstly, Jaap Sahib provides intimate interactions with the Ultimate Reality ‘Sarab Naam’. So here, the ultimate reality is ‘Sarab Naam’. Secondly, the author describes the reality of the cosmic person – Aad Purkh. Then the reality of the cosmic person as a deity (Lok Mata). There was then an exploration of Jaap Sahib’s use of space and time (Chatar chakar vartee, sarab kale) and perception (Ek Murat anek darsan) – everyone sees something different, like the elephant in a dark room. Lastly the Nirgun vs Sargun aspects are explored and rather than these two aspects being described as contradictions, they are all encompassing I.e. Waheguru is of no country or place, yet is in every place and country.

The author attempts to use these metaphysical concepts to explore the various singularities and qualities of Waheguru. So rather than purely exploring one quality of Waheguru as a possible deity, Jaap Sahib is taking multiple qualities and facets of Waheguru and creating a wider experience for the devotee to immerse themselves within. The title of the book is ‘Basking in the Presence of the Divine’ rather than ‘Basking in the Presence of God’. The Divine has a whole different connotation for us than the Abrahamic impression of a God. In Jaap Sahib, Guru Ji is encouraging us to go beyond what we think we know about ‘God’ and highlighting that there are no limitations on Akaal Purakh, there is no vengeful God as such, and that the Divine is all-encompassing. So although we may all experience elements of the truth, the truth might feel different to each of us depending on our own experiences. Guru Gobind Singh Ji lifts us out of that (Ek Murat Anek Darsan) and provides a full spiritual experience.

One of the key elements of Sikh spirituality which was discussed in the book was the commonly perceived gap between Prakrit and Purakh and I.e. matter and spirit/universal soul. In the majority of Abrahamic traditions, these two elements of life are regarded as being distinct and not overlapping in any way. In the Sikh tradition Guru Gobind Singh Ji highlights that they both exist, but are also one and the same. The author goes on to highlight that creation and destruction are a cycle (and how Jaap Sahib describes this cycle within its verses). Eventually Guru Gobind Singh Ji says ‘Namo Kaal Kaaley’ as an indication that Waheguru is the destroyer of destruction itself, and is the one controlling both aspects of the world game.

The members reflected upon the evocative nature of Jaap Sahib – to the extent that the reader/listener can get some emotional response even without understanding the fullness of its meanings. The whole baani could be regarded as a battle with one’s own ego, as well as a reflection of Waheguru itself.

The author described and analysed the different chands within Jaap Sahib which briefly comprised the following. These chands can be considered one fluid warrior-like movement in battle, highlighting the incredible poetry which is contained within this Baani.

Harbolmana Chhand – the prayer before a fatal blow

In terms of the rhythmical structure of Jaap Sahib, the members discussed the differing beats used within the verses e.g. three and four beat structures. There are immediately recognisable rhythms in Jaap Sahib which are commonly associated with Bir Ras, warrior-nature or high energy and tempo. However in reality there are also more significant spiritual and devotional undertones throughout the baani. The grammar used within Gurbani and Dasam Bani does not follow any one recognised structure and content. Rather Guru Sahib integrated multiple forms of grammar from different languages and rhythms, as well as inventing their own grammar rules. This essentially means that parts of Jaap Sahib transcend religions and community barriers and can be recognised as having meaning with different people regardless of their background and language. The use of literary skills such as onomatopoeia was also discussed. For example the sound of the words ‘Sarbang Pranang’ reflect the meaning of the words themselves, and can be said to sound like a warrior fencing with a sword. Similarly word imagery is used extensively within Jaap Sahib.

Towards the end of the book, the author discusses the warrior spirit within Jaap Sahib. The members discussed whether the purpose of Jaap Sahib is to infuse warrior spirit, and whether it is for only the Khalsa or for everyone. The members discussed that prayer in many other faiths has been misused throughout history by religious zealouts and their various agendas. However the spirit within Jaap Sahib feels different, in that there is an element of spiritual worship as well as true understanding of the Oneness of Waheguru. This is much more than simply encouraging a purely physical warrior spirit. This resulted in a discussion amongst members about whether a true Khalsa warrior has to transcend their ego and anger completely, or whether an element of aggression or anger is needed to be an effective soldier. This debate is likely to continue in future book club discussions, but is, as one member reflected, very theoretical as none of the members are actual warriors with real experience.

The members concluded with their final thoughts on the book. It was mentioned that the author had singularly focused on Jaap Sahib (rather than falling into the trap of validating Dasam Bani by relating it to Gurbani within Guru Granth Sahib Ji). It was overall felt that this was a very rare book which covers the majority of concepts within Sikh spiritual wisdom and is therefore highly valuable.