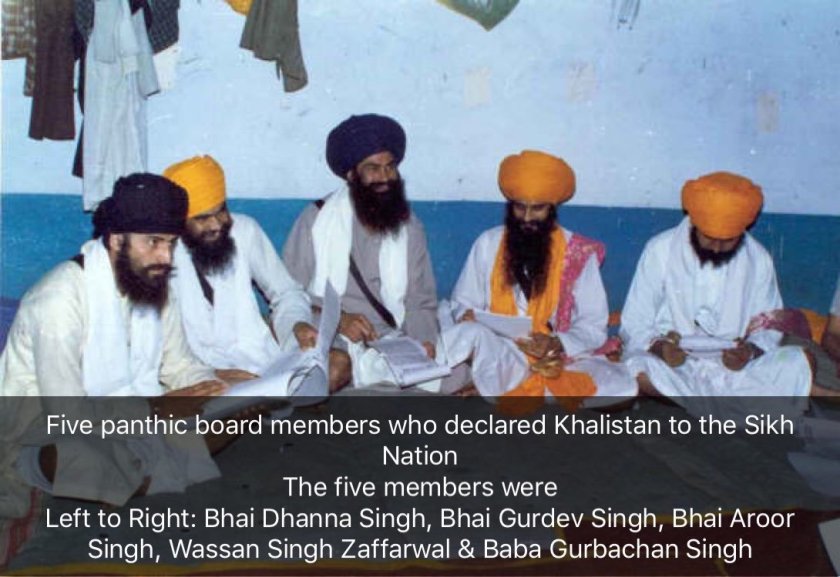 This month the Sikhi Book Club discussed the Draft of the Constitution and Declaration of Khalistan which can be found here.

The members initially discussed the reasons behind the declaration of Khalistan, namely that this was prompted by the systematic discrimination against the Sikhs by the governing forces in India throughout the 1970s and 80s. The document itself described the initial reason as being ‘Raj Karega Khalsa’ and the authors interpreted this as meaning that the Khalsa will rule i.e. that Khalistan was predestined or commanded by the Guru, and that it was the Panth that was a mere vehicle in delivering this reality. Some members felt that the words Raj Karega Khalse had been misinterpreted for political purposes, and there was a discussion about whether the words referred to worldly or spiritual Raaj.

The members discussed the defining features of a constitution I.e. that this is the guidelines of governance, a collection of rules and regulations which can be fluid but rarely dramatically change. One definition is that the constitution should form the basic law of a state or government, defining what the state and citizen can or can’t do. The declaration of Khalistan is at direct odds with the justification of independence made by other countries e.g. in America the constitution begins with ‘We the people..’ but in this document, the justification is almost spiritual as commanded by Guru Gobind Singh Ji. The Indian constitution itself is a long but relatively young document which in theory protects the rights of all minorities and abolishes the caste system, but in reality the Indian constitution has failed in achieving these goals. The recognition of the Akal Takht as being a central pillar of governance was a direct challenge to the political power which was in place at the time. The constitution of Khalistan is also brief, and has a number of (possibly idealistic) aims but uses a supreme authority as the guiding principles.

Although not the main focus of the book club’s meeting, there was some discussion as to whether the Khalistan movement was justified or not. Was it done for personal gain and power or was it truly righteous (founded on the principles of Dharam)? Do the people for Khalistan want it for greed or to protect the rights of the minority? It is likely that the majority in favour for Khalistant want it for the latter.

The members also felt that the document lacked many details and definitions e.g. what is a Panthic committee and who forms this, how are the Panj Pyare chosen etc. However it was also recognised that these definitions would not ordinarily be contained within a document such as a constitution. The members reflected that the motives behind Khalistan were ultimately aiming to bridge the gap between the modern Sikh state and the traditional form of governance. At the same time the document made it clear that the final say on decisions would lie with the Panj Pyare, but that everyone could have input into this decision. It was mentioned that this is similar to the Iranian principles of governance where learned scholars have power of a veto, and only people of a certain moral standard can be in government. The document specified that Khalistant would be open to all, but that only initiated Khalsa Sikhs could be in government. Non-religious organisations would be welcomed and could even continue missionary practice.

The details of the constitution and declaration were then examined. The question was raised as to how qualified the Panj Pyare would be in formulating foreign and economic policy for the nation. Several of the ideas set in the constitution appeared to mirror the values of Guru Hargobind Sahib I.e. free healthcare and medicine, free veterinary services. Co-operatives were also mentioned I.e. people making decisions together rather than there being a top down board type structure to decision making. The members considered that there was advanced thinking for the period of time including the emphasis placed on equality and openness. Economic monopolies would not be permitted but there would be some controls upon economy. At the same time there were some odd comments about joining and preserving the commonwealth which felt unusual to the members, who were unclear as to how this would provide benefit to an independent Sikh nation (especially given that the head of the commonwealth is the monarch of the UK). There was some discussion about the advantages of a soft border with checks and security involved (as opposed to the hard border which exists between India and Pakistan today).

Sadly most of the Khalsas who wrote this document were murdered by the Indian government. As we understand it there were no political parties involved in the development of the document. The discussion concluded that this document was a direct result of Sarbat Khalsa which resulted in the declaration and formation of the draft constitution. It did not appear to be purely politically driven but rather integrated religion. It didn’t define or limit it to Punjab state as such, and contained many far-reaching future ideals which were almost entirely in keeping with principles of the Sikh Dharam.