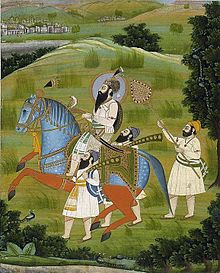 This month’s book was ‘Travels of Guru Gobind Singh’ by Fauja Singh. The book can be found here.

The members began the discussion by reflecting on the the commendable efforts made by the authors to chronicle Guru Gobind Singh Ji’s life and events. The book placed emphasis on the importance of understanding geography, and how this in turn helps us to understand the strategic decisions which were made by the Guru. Clearly the authors had gone to a huge amount of trouble to research and catelogue the travels of Guru Gobind Singh Ji from a diverse number of sources. We often hear about the four Udasis of Guru Nanak Dev Ji but it is less often that we hear about the travels of the other Gurus, and indeed none of the members had previously encountered this book.

It is interesting that Guru Gobind Singh Ji only spent his childhood in the plains of India – the majority of his human life was spent in the foothills of the Himalayan ranges. From a historical perspective, geography plays an important role in the defence of a nation e.g. the Afghans have defended their mountainous country for many decades, but Punjab was much harder to defend as recently as the 1980s when there was little in the way of anything other than flat land. At the same time the book provided an insight into how large Punjab used to be, and also how the names of important places have changed over time e.g. the original name given to Anandpur Sahib was Makhowal. The Guru presumably often travelled with a large group of people (in effect travelling within a mobile court) but at certain points also travelled alone and in disguise. Along the way gifts were given by the Sikhs to their Guru, and the Guru in turn gave the Sikhs various written and verbal hukamnamas or orders. In this way the Guru was in constant contact with the Sangat across the country. Certainly right from a very young age the Guru travelled extensively with his family and crosses the Ganges river many times on his travels around India.

The book would have been even better if any available maps used in the 1600s had been included, to reflect the lay of the land at the time. Presumably the the Gurus would have had their own maps also, to provide them with an overview of the land which required defending. Forts were clearly built strategically and with clear purpose.

Interestingly, Guru Gobind Singh Ji visited many places of pilgrimage which are not often associated with the Sikh faith now e.g. the confluence of the rivers at Triveni and other sacred shrines and places of worship. This calls into question the attitude that many Sikhs have today of shunning such places. It is unclear from the book whether Guru Gobind Singh Ji visited these places to do parchaar or to pay homage to ancient places of dharam. Throughout their travels, Gurdwaras sprang up at many places along the way. It is difficult to know if all these Gurdwaras still remain or whether we have lost a significant proportion of them over time. The book provided a significant insight onto the experiences the Guru Gobind Singh Ji encountered during their travels, including the stories behind some of the Gurdwaras which were built.

The book also touched upon the adopted sons of Guru Gobind Singh Ji, which again is not common knowledge amongst Sikhs today. Also interesting was the timeline of the Guru’s travels in chronological order which helped to take the readers on a similar journey. Members concluded that this made the book easy to read and the supplemental use of maps and pictures helped to bring the travels alive in the eye of the reader.