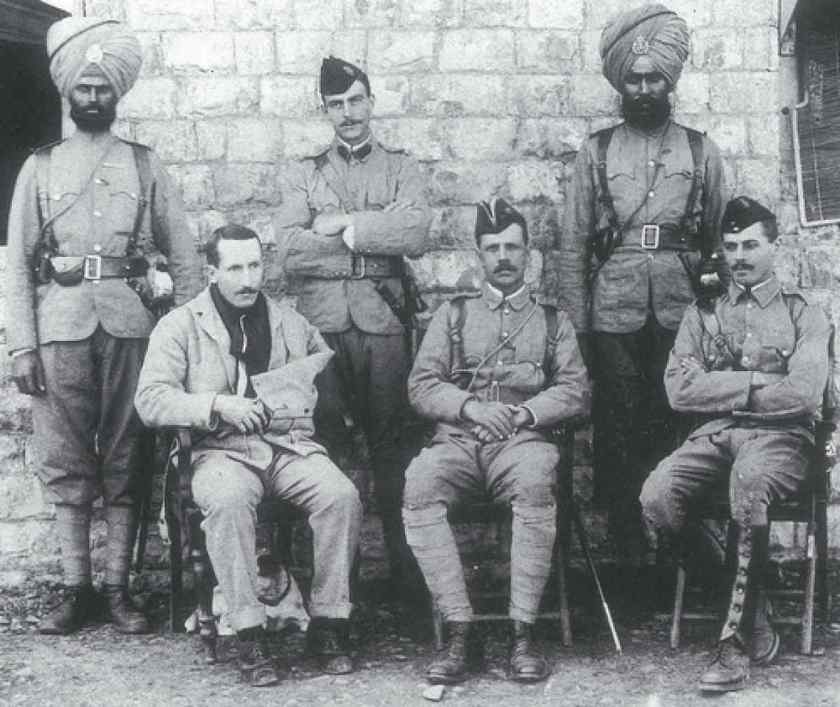 The members began the discussion by recognising the growing movement of Saragarhi being discussed in recent months. In the city of Bradford, the children from the Punjabi schools have come together collectively to make posterboards about the Saragarhi battle. Similarly members reflected that there was a meeting of military defence personnel in Leeds and there was a talk on Saragarhi last year. Overall there is a growing awareness of this battle and perhaps it is now less forgotten. This is likely to to be as a result of the author’s determination to spread awareness about the topic.

The author compared Saragarhi to the ‘300’ epic battle between the Spartans and Persians which has been portrayed in films. Comparatively Saragarhi is less well known and this inspired the author to write and research the subject. The members discussed why is Saragarhi forgotten? One member felt that this is because the Sikh soldiers were regarded as second class citizens of the British army as they were not natively British. On the other hand the British did their part to monumentalise the efforts of the Sikhs e.g. putting monuments up in Amritsar. The author reflects that Sikhs predominantly don’t tend to read very much, and therefore history is forgotten. Similarly our education systems don’t value the sacrifice, and therefore the battle is not routinely taught in Indian education. The monument isn’t well known in Amritsar, even though Amritsar is visited by millions of people worldwide. History is easily forgotten!

There is no doubt that there is much sentiment surrounding the battle. In some ways this has made it harder for the author to research the battle accurately as there have been many myths spread about the battle. One member recalled receiving leaflets in Africa about the battle from the Indian Government which contained some of these myths.

The members reflected that the production of the book is highly commendable and an excellent effort. We definitely need more books like this within the Panth and wider public. There were some minor criticisms of the book by the members. Unfortunately the book contains a number of relatively minor spelling mistakes. The term warrior-saint is used to describe the Sikhs but the term put forward by history is saint-warrior and there are fundamental reasons why this is the case, as being warriors comes secondary to spirituality. Overall the members felt that the book was well structured, with chronological events, a foreword and preface. The subsequent chapters also followed on well and provided the reader with a good structure surrounding the narrative. There were some points which could be incorporated to improve the quality of the published book, but these are relatively minor points compared with the efforts taken to produce the book. The members recognised that the author has made huge efforts in publishing the book and has in all liklihood self-funded the publication.

Moving on to the content of the book, the author provided a good historical background of events leading up to the battle of Saragarhi. The members discussed whether the book one-sided in termsof perspective. Obviously the focus of the author is the perspective of the Sikhs and the British army. However the perspective of Pathans is not discussed. It was once said that Afghanistan is the graveyard of armies, and the local people of the time must also have an interesting alternative viewpoint of the historical events. However it is possible that the viewpoint of the Pathans has not been recorded and is therefore more difficult to represent. It is also well known that colonial masters often bribed villagers and locals to prevent them from discussing events openly. This also may skew historical accounts.

The members discussed the implication that the martial spirit of the Sikhs was born out of shaheedi of the 5th and 9th Gurus. Some members felt that these events should have been discussed in more detail if this was the case. However other members felt that this viewpoint was not accurate and that it minimised the martial history of the Sikhs which actually begun much earlier in history and was integral to the faith from the beginning, rather than being a reaction or a result of Mughal invaders. One member reflected upon the fact that there is evidence of Guru Nanak Dev Ji being armed and demonstrating physical combat with Babar. The shaster vidhya tradition pays homage to this and continues to teach Baba Nanak Pentra (the footwork of Guru Nanak Dev Ji) as a model of fighting. Some felt that dialogue and diplomacy is part and parcel of martial spirit.

The historical sacrifices made by the Sikhs at Chamkaur Sahib was mentioned by the author as comparative to the battle of Saragarhi. However Chamkaur Sahib possibly reflects an even purer sacrifice as the Sikhs were an autonomous unit fighting directly for the Guru rather than being influenced by a colonial mentality. However the members recognised that the author is part of the British army and therefore has a dual allegiance with this unit which still exists today. In this situation is difficult for a writer to be impartial in narrating events. It also means that despite the battle of Chamkaur Sahib being one of the most significant for the Sikhs, the battle of Saragarhi was chosen for study by the author, possibly in view of his connections with the same army.

It is interesting that there was a profound change in Sikh allegiance over a period of 20-30 years in India during this period. The members felt that this needed a little more explanation and analysis. The same soldiers who were fighting against the British earlier in the century were now fighting with them to battle the Pathans. The author implied that historically the Pathans were the enemy of the Sikhs, but Sikh philosophy doesn’t hold subsequent generations accountable for the actions of their ancestors. Similarly it is easy to see the viewpoint of the Pathans who waged a war for what they saw as being the right to govern their own native lands. One could argue that the Sikhs should have been fighting with the Pathans against the British.

The members reflected on the lengths that the colonial masters went to try and manipulate Sikh heritage and texts, which influences our views and perceptions to this day. Panth Prakash was written by Bhai Rattan Singh as a direct response to this. In a well written historical narration of Sikh History, the author alludes to Sikhs within the army giving their head to their Gurus in Amrit Sanchars and dually swearing allegiance to the British crown at the same time. The members reflected upon the potential conflict this might cause, as soldiers are inevitably drawn into unjust wars. On the other hand being a soldier is a job, and being drawn into an unjust war may simply be part of that job. But it shouldn’t be compared at the same level to giving one’s head to the Guru.

The author and writers of the time implied that the Sikhs would have merged into Hinduism without the saving grace of the British Army. The members discussed the irony of this statement. Did the British help the Sikhs to keep their identity? Or had they intentionally destroyed the Sikh identity and subsequently taken the credit for encouraging its reinstatement? Similarly the colonial masters were paying for the installation of the Mahants – but were they put there to protect Sikh values or were they stooges of the British? There is no doubt that the British were paying politics – much of our modern history is a byproduct of their cunning. The fact of life is that rulers played whatever cards they can to serve their own interests. In the context of the battle of Saragarhi, the British employed methods to initially keep the Sikhs as second class citizens and and then subsequently used their skills to their advantage when it suited them. The Sikh soldiers were not given the same recognition and rewards as the British soldiers.

Nothing can diminish the sacrifice of the soldiers involved in the battle. In the chapter entitled ‘The Last Stand’, the numbers are stark, sharply convincing the reader that the odds in this battle were overwhelming. The author provided an insight into the weapons used and possible number of rounds fired, and compared this with modern weaponary in order to bring the battle to life. The leader Isher Singh demonstrated true leadership and led from the front rather than from a distance. However despite the factual nature of the book, Gurmukh Singh is regarded as taking his own life. This was an odd assumption to make given that the author consistently tried to narrate the events factually. Regardless, it is clear that the faith of the Sikh soldiers involved in the battle cannot be doubted.

It is interesting that historically the concept of a Sikh Nation and Sikh nationals was routinely accepted in the late 1800s. Now it is regarded as a divisive and politically loaded issue, and those in favour of a Sikh nation are regarded almost as fanatics. It is interesting how perspectives change over a relatively short period of time.

Taking away the political aspects of the situation, the book ultimately recognises the huge sacrifice made by our Sikh fathers and grandfathers, and provides readers with a unique opportunity to learn lessons from the battle. It is an excellent example of Sikh-inspired research and historical analysis which is now widely available for the public to read. We can only hope that the author and other writers will continue to produce further publications after similar efforts.