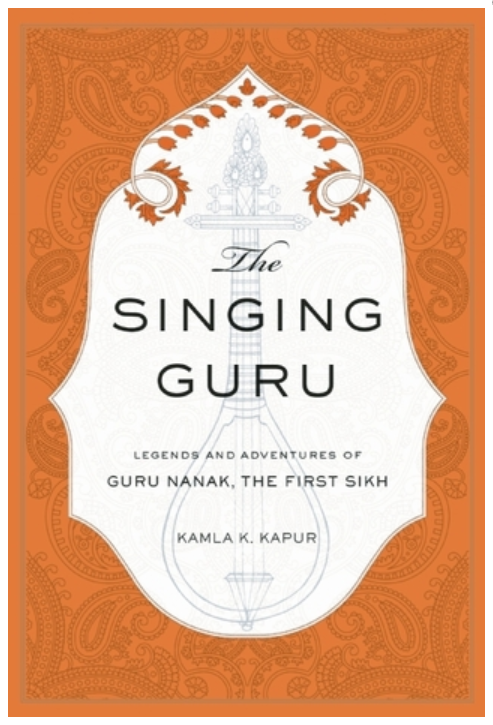 This month the Sikhi Book Club discussed the book ‘The Singing Guru: Legends and Adventures of Guru Nanak’ by Kamla K Kapur. Copies of the book were kindly donated by a member of the book club. It can be purchased here.

The discussion began with a summary of the author’s background, which highlighted difficult times in her life which had contributed to her writing this book. Some members were sceptical regarding the content of a book from an author who has explored other traditions (such as Sufism and Hindu mythology) but it became clear as the book was read that these fears were quashed. The title of the book indicated that there was going to be a focus on the singing aspect of Guru Nanak Dev Ji, and whilst there was narrative on the history of Bhai Mardana’s rabab some members felt that there was lot more musical-related history which could have been incorporated. However others found that the title drew readers in, and the book’s aim was to tell the story rather than to focus on the high significance of music in the Sikh tradition. One member commented on the difference in focus between Western and Eastern books (broadly speaking). Historical books written by Western academics often focus on chronological history and fact, whereas books such as this one ebb and flow with the message at the centre.

The members then went on to discuss the unique way in which the story was told from the perspective of Bhai Mardana Ji in the form of a goat, describing his life with the Guru to the other men/goats who had similarly been trapped by their desires. Bhai Mardana Ji was felt to be a metaphor by the Sikh who has highs and low, and conflicting relationship with the Guru. In this way he was a highly relatable figure for readers. Some people might have found the goat-perspective strange, but for non-Sikhs potentially this is a powerful medium for telling the story – and the author was clear that this book is a mixture of artistic license and history. Some people felt that Bhai Mardana has been ‘reduced’ in a way, and portrayed as someone with too many flaws when history tells us that he was one of the closest and most significant Sikhs of time. But members found that once they accepted the author’s premise, there was much to be gained by reading on and absorbing the wider messages of the book. Others got over this by imagining that the book was being written from their perspective rather than by Bhai Mardana’s. The book is essentially a philosophical or spiritual book, rather than a book cemented in history.

The book was full of examples of Bhai Mardana falling away from the Guru, and then being lifted by Guru Nanak Dev Ji. It felt like his true enlightenment only came at the end of the book, with many fluctuations in between. Perhaps Bhai Mardana was made to appear malleable in order to make him relatable to the reader. The members discussed that the Guru can save you in an instant, but equally in others the wisdom is given in stages through life. We discussed which chapters resonated the most with the members and different people shared their views. The chapter regarding Bhai Mardana Ji dying in the fish was pondered over. Some felt this chapter didn’t add anything and weren’t sure what this ‘death’ was meant to signify as it didn’t necessarily signal his enlightenment.

The chapter about Bhai Mardana Ji’s impending death as a goat was particularly significant and enjoyed for its wisdom by the members. When it came to him being slaughtered, Bhai Mardana experiences many feelings which the readers related to. Guru Nanak Dev Ji didn’t directly save Bhai Mardana and the other goats in an obvious way, but instead provided the goats with a method to save themselves. The imagery of a rotating room mirrored the mind’s lack of stillness, and despite the instruction of the Guru, many still fell.

The book club talked about the definition of a Sikh in the context of Bhai Mardana Ji. Was he a Sikh, a rababi, or a Muslim? The book club members mentioned the shabad attributed to Bhai Mardana which comes in Gurbani in Raag Bihaagra, therefore indicating that he had attained a much higher level than even just being a Sikh and is rather akin to, or one with, the Guru. Our modern definitions of Sikh may be distorted by lines placed centuries after the first Sikhs walked the earth. It is interesting that even for such an elevated soul, after being away from his family for 25 years his return to family life was not smooth according to this book. The portrayal of his son being annoyed at him and similar scenario in Guru Nanak Dev Ji’s house showed the sacrifices required of such individuals to spread the message of Oneness. Perhaps this shows the flaw of painting the lives of such Sikhs as being straightforward, in reality life was probably just as complicated as it is now.

The members found the description of Kartarpur interesting and vivid. It was described as a model city and gurdwara, showing the sangat learning from each other through open and honest discussions, and the Guru interacting with and living among the people rather than simply preaching. The picture painted of Kartarpur is very distant from the reality of many Gurdwaras today, where very little sincere discussion takes place among the sangat.

Whilst some aspects of this book didn’t quite sit right with the members, most agreed that it was a book worth reading and discussing for its underlying message and applicability to us as individuals. The use of comedy and perspective was refreshing and we haven’t covered many books in the book club thus far which have this slant. This book highlights some of the pitfalls of using history to create fiction, and shows the importance of knowing your audience. The end of the book was praised by all, with the introduction of Baba Budha Ji and Guru Angad Dev Ji. We understand that a second book has been written in this series, which gives readers the option of continuing this journey with Kamla Kapur.

2 thoughts on “‘The Singing Guru: Legends and Adventures of Guru Nanak’ by Kamla K Kapur”