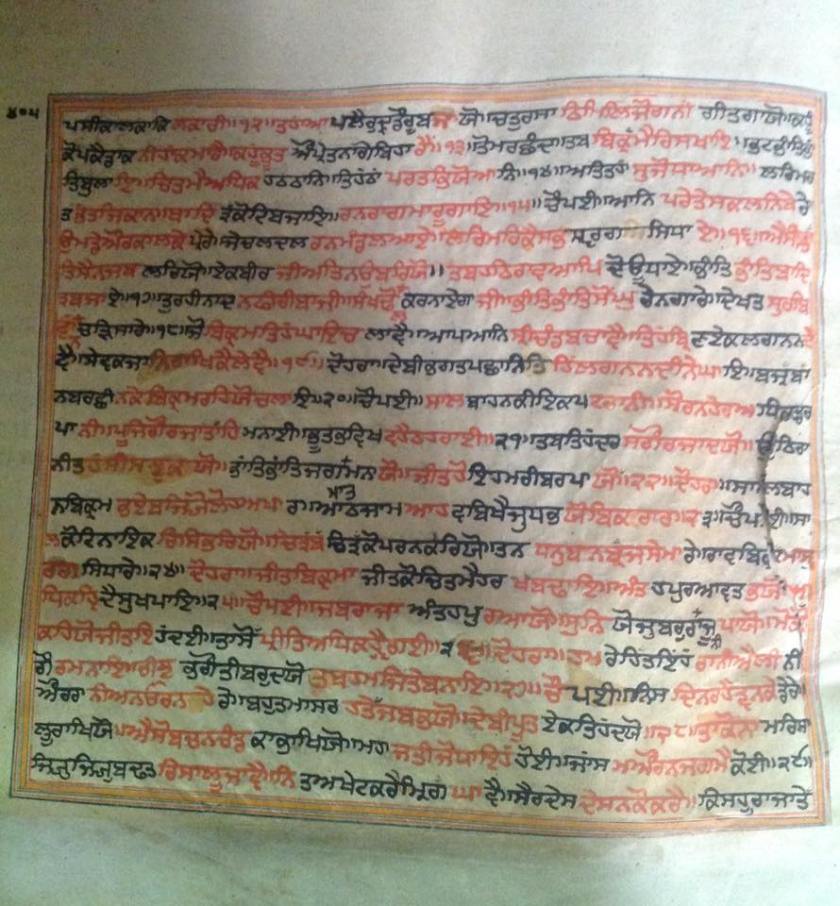 This month the Sikhi book club members discussed the article ‘Sri Charitropakhyan’ by Prabhjot Singh. This article is available as a pdf here.

This article is essentially a summary and overview of Sri Charitropakhyan which is contained within Sri Dasam Granth Sahib. It was written some years ago during a period of time when there was significant controversy over this Bani. It was clear to all the members that this article was not written to present both points of view, but was essentially written to provide evidence and enhance understanding that this Bani is in line with the rest of the teachings within Sri Guru Granth Sahib Ji and Dasam Bani. It was noted that the article had originally been posted on an online forum, and subsequently had been put together in PDF format for ease of reading. Some members felt that the ‘introductory’ paragraphs by the author should have been removed so that the focus was on the content of the article itself.

The article was divided into four logical sections, covering different aspects of Sri Charitropakhyan. The first of these was an analysis of Chandi Charitar (the first Charitar). There was a helpful overview on the reasons why this Bani was written, and a summary of the content. The author highlighted that each story within this text has a moral message, and essentially acts as a guide for how Sikhs should live their lives and deal with negative, dangerous or unsavoury situations. Guru Gobind Singh Ji does an awesome analysis on societal pain, criminal mentality and the problems which arise from intense lust. These issues have been highly relevant throughout time, and are potently relevant in today’s society (both within the Sikh Panth and in the world in general). Prabhjot Singh talked about the reasons why Devis and Devte are mentioned in Gurbani, and discussed the concept of Chandi as describing the source of creation (Akaal Purakh) which the members found was a good starting point for the rest of the analysis.

It was made clear within this article that this Bani was not written to defame women, but was instead written to describe the complexity and potential indescribable value of women in society. Guru Gobind Singh Ji has written a compelling criticism of a male dominated society which superficially gives women equal rights, whilst consistently undermining women and keeping them at a distance from true power. He discusses the complexity of a woman’s characteristics, describing examples of how women are driven to immorality as a result of excessive male desires. Conversely Guru Sahib also describes the wisdom of women in preventing men from becoming power-obsessed, and shows the potential strength of character that women have which ultimately is a positive force for good in a male dominated society. This is highlighted through the story of ‘Baala’ who rises out of the ashes of battle as a force for purity and wisdom.

The members found it particularly useful reading Prabhjot Singh’s summary of the story of King Charitar. Seven key points were summarised here which highlighted the main messages that any Sikh can take from this story. The members discussed that often, when Dasam Bani is being discussed, it is discussed by people who haven’t actually read any of it. As Sikhs today we are eager to have soundbites but we don’t want to do the reading and in depth analysis of whole pieces of literature written by our Gurus. In today’s society tabloid newspapers and TV shows are actually a product of the very things Guru Gobind Singh Ji has written about. If we could read Sri Charitropakhyan to enhance our own learning and adopt its messages as a tool to improve our way of living, this will make a huge difference (rather than simply reading it and discussing it for the sake of having arguments).

Guru Gobind Singh Ji clearly wrote this play as a shrewd analysis of the human condition. Too often religions lay down black and white rules of what should and shouldn’t be done. Here, the Guru describes many different aspects of men and women, both good and bad, reflecting the potential we all have for various emotions and desires. Ultimately the Bani implies that Sikhs blessed with a true understanding have the rationale and wisdom to make decent decisions, and act according to this intellect. Guru Sahib isn’t telling us in uncertain terms to do this or that, but rather is highlighting (through the art of story telling) that if you choose to go down a path where lust controls your thoughts, this potentially what can happen, giving several examples. Guru Sahib is also placing emphasis on the fact that Sikhs will undoubtedly face such dilemmas and should know how to deal with them. He provides guidance on how to be Ghar Gristhi (and interestingly this wisdom comes from character of a Brahmin’s in one of the Charitars). It is clear in that particular Charitar that Guru Gobind Singh Ji is refuting the traditions of the Brahmins.

In the last Charitar, the scenes are emotive and awe-inspiring. Guru Gobind Singh Ji brings all the concepts discussed previously together into an epic narrative. The members discussed how two lines of this are included within Rehraas Sahib, and discussed the importance of Sikhs knowing where this comes from and what these lines refer to in order to gain the most benefit from the wisdom that is in Sri Charitropakhyan. Then follows Chaupai Sahib which essentially asks for the strength to righteously enact the wisdom contained in the guidance that has preceded it. It is sad that many Sikhs would be in complete denial if they realised that part of Rehras Sahib was actually derived from Sri Charitropakhyan.

In conclusion, the members reflected that this article was well worth reading. Whilst the Punjabi translations were a bit difficult to read and the editing of the article could have been improved, the content fulfilled its purpose in providing an overview and analysis of the messages behind Sri Charitropakhyan. Guru Gobind Singh Ji has provided an in depth treatise on daily ethics which is highly relevant and invaluable to help us lead better lives. Fundamentally it demonstrates the Guru’s far-reaching analysis on the power and complexity of women, and the positive contribution they can make to society, whilst holding men to account for many of the problems the world faces today. Hopefully as time goes on, more Sikhs will be able to take benefit and wisdom from this piece of Bani. This article is a good place for that journey to begin.