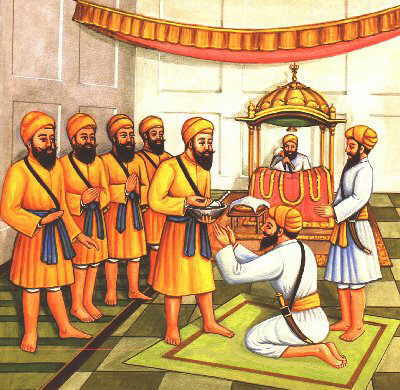 This month the Sikhi Book Club discussed the article ‘Sikh Leadership: Established Ideals and Diasporic Reality’ by Harinder Singh and Simran Jeet Singh published via Trinity University in association with the Sikh Research Institute. The article can be found here.

The members began by sharing their initial thoughts on the article, with some saying that they felt it was a very important and thought-provoking topic, whilst others felt that the article lacked sufficient depth and solutions. There was discussion on how we portray our Gurus in a public sphere such as this journal or in the media. The authors described the Gurus as ‘Guru-Prophets’ which some members didn’t like, as they felt it did not do justice to the significance of the Gurus and was an attempt to use non-Sikh language to characterise the Gurus. However others felt this was a relatively minor issue. The members reflected that leaders often arise out of the frustrations of the public or sangat, and that in many modern day examples leaders are born from social injustice.

The article presented the ideal qualities of a Sikh leader, including self-sovereignty, servitude, creativity, compassion and divine inspiration. After going through these qualities we discussed whether or not the concept of equality for all was realistic, and what equality really means. Are all voices truly equal and should they be? In current political times, we have examples where the masses are given an ‘equal’ voice and this has led to turmoil because not everybody is truly qualified to make significant decisions. A leader usually remains above the general masses, but at the same time has to ensure equality for all in line with Sikh principles. The example of Guru Gobind Singh Ji rings true in demonstrating the true qualities of a leader, when he bowed to the Panj Pyare and Panth as being higher than his own throne, despite being the King of Kings. The members also discussed whether it was realistic to aim for the ideals of the Guru in terms of leadership. Ultimately the members agreed that if you were going to use anyone as a role model, it might as well be the Guru as who else’s footsteps should we aim to walk in?

The book club members also discussed the fact that there is a dichotomy in terms of leaderships within the Sikh Panth. On one hand, there are many people in the Panth who shy away from leadership despite being able. On the other hand, many other people become leaders without the qualifications to fulfil this role and vie for leadership for selfish or power-related reasons. One member made an interesting point regarding communities receiving leaders that they deserve. In other words, that leaders are born of the people they represent, and what we as individuals invest in a society ultimately impacts on the leaders that are produced.

The discussion moved on to development of leadership in Punjab. The article highlighted the three authentic schools of development (Taksal, Udasis and Nirmala Panth) and the members discussed the fact that traditional schools place emphasis on a structured and extensive educational model which is not universally adopted by Sikh individuals. In fact many Sikhs now invest time in material development to a a much greater extent than anything else (for example, having 12-13 years of schooling followed by a degree, followed by work) but we are reluctant to adopt this same level of personal development when it comes to spiritual education. The article highlighted youth camps as being one way that Sikh leaders are developed in the West, and the pros and cons of camps were discussed by the members. We discussed the fact that camps are symptoms of problems within the Panth in that Gurdwaras are not necessarily fulfilling their obligations in providing spiritual and temporal knowledge and engagement, so camps are held in an attempt to provide this for one or two days but without ongoing follow up for individuals or evaluation of their effect. Nonetheless they are important methods of introducing young Sikhs to other Sikhs.

One of the members raised the question as to whether Sikhs generally feel the need for leadership. The members discussed the need for local leaders, family leaders, as well as leaders of the Panth more broadly and what forms this could take. We reflected upon the principles of leadership as put forth by Guru Gobind Singh Ji and the fact that Sikhs are enouraged to be leaders in all aspects (material and spiritual). We talked about the organisations in the USA who have formed to represent Sikhs in the aftermath of 9/11 and have produced scholarships and pathways around Sikh leadership and how to build confidence amongst young Sikhs today.

The members concluded by sharing their final thoughts on the article. All were in agreement that the topic was relevant and important, but some expressed frustration that there wasn’t more depth in terms of analysis of previous leaders and discussion about potential strategies for shaping leaders of the future. Perhaps this was outside the scope of this article. The members agreed that the topic of leadership was felt to be a fitting one for the occasion of Guru Gobind Singh Ji’s Gurpurab.